Get the new Air Display for Mac 🖥 🖥

Stay productive while sheltering at home

I hope you’re safe and healthy.

At Avatron, we know it can be a challenge for professionals to remain productive while sheltering at home, so we decided to do our part to help. It dawned on us that many of us have both a work Mac laptop and a home Mac. So we went back and recommitted to Air Display for Mac. And now we have…

New Mac client. We’ve released an all-new Mac client for Air Display in the Mac App Store. Now you can combine your home Mac and your work Mac, and become a multi-monitor workstation-productivity wizard.
New Mac host. You’ll want to update to our latest release of the macOS host software for Air Display. The old version required a complicated workaround to install on recent versions of macOS 10.15 (Catalina). The new version 3.3 installs with ease. And it enables the performance improvements in the Mac client app.

We get it. The Mac client for Air Display had suffered from inattention and became too slow to be really usable. The iOS Air Display client was much much faster despite running on a slower processor with a smaller screen. So we did what engineers do: we relentlessly worked long hours and we beat it into submission. It’s finally done, just in time for for… more working at home.

The new Air Display for Mac is 800% faster and supports Retina resolutions. So if you want to use your home Mac screen to extend your work Mac’s screen, we’ve got you covered.

And because Air Display can connect to four clients simultaneously, you can have a Mac, an iPad, an Android tablet, and a Windows PC all connected to your Mac. Or four Macs. Or one Mac, two PCs, and … well you get the idea.

Get Air Display in the Mac App Store. 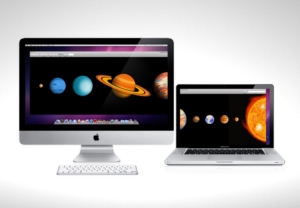 macOS 10.15 (Catalina) posed some challenges for the Air Display host. Installation required a workaround involving the Terminal app and multiple restarts. We have fixed that, and now the installer works without a hitch.

Note: There are still some special considerations for installing virtual monitors on Catalina. After installing, macOS will ask whether you want to grant permissions to Air Display. Please say yes. Doing so allows Air Display’s video driver to load, and allows the host software to get pixels from its video driver so it can stream video to the client app.

If you love Air Display, please leave a review in the App Store, the Mac App Store, or Google Play. Let everybody know how you use the app. And if you have questions or suggestions, please send an email to our stalwart tech support rep, Pip, at support@avatron.com.

Here’s hoping we all stay healthy!