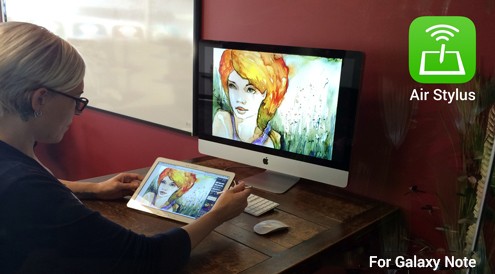 Working with a host app on your Mac, Air Stylus turns your Galaxy Note into a pressure-sensitive second screen so you can paint directly into your computer-based creative software like Photoshop, Illustrator, Lightroom, Motion, or SketchBook.

At first blush this sounds like a port of our Air Stylus app for iOS, and of course from the engineering perspective that’s what it is. But it’s way more interesting than that, because Samsung’s Galaxy Note is the perfect platform for Air Stylus. We shipped the iOS edition first, but it is the Galaxy Note that that has really gotten us excited.

Unlike the iPad, the Galaxy Note comes with a pressure-sensitive screen and a built-in stylus. And not just a dumb stylus, but the S Pen™, which Samsung licenses from our friends at Wacom Technology. (Wacom is headquartered in Japan but does all of its real work across the river from us in Vancouver, Washington.)

If you do graphics work, you know about Wacom. Wacom has been making graphics tablets for over 30 years. Like Wacom’s other pressure-sensitive pens, the S Pen communicates with the tablet passively via “resonant inductive coupling.” It doesn’t even need a battery, which makes the S Pen really cheap to produce. While pressure-sensitive pens for iOS cost $50–200, you get one for free with every Galaxy Note, or you can buy an S Pen with an “eraser” feature for about $12. Seriously, the S Pen is amazing. We geeked out when we learned that the S Pen’s magnetic resonant induction works like a tiny MRI machine.

The S Pen allows Air Stylus for Galaxy Note to do accurate palm rejection, which also works on iOS but is not 100% accurate. It also lets us recognize “hovering:” when you move the pen around without touching the screen, it moves the mouse without clicking.

Holding the S Pen about an inch from the screen will let you position the cursor (or paint brush, or pen tool) without touching the screen at all

And Galaxy Notes are very fast, with up to four processors. Finally, Samsung makes a 12.2″ version called the Galaxy Note Pro 12.2, which makes a great wireless computer screen.

We specifically targeted the Galaxy Note family of devices because its unique feature set is an ideal match for Air Stylus, and also because limiting our compatibility solves one of the the biggest headaches of writing apps for Android: the number of different device types and operating system versions out there.

Every version of Android introduces new features, and device makers can add tweaks of their own, making it impossible to test Android apps in every configuration. Samsung has shipped about a hundred million Galaxy Note tablets and phablets in the past three years, and they are all compatible with Air Stylus.

We can’t wait to hear people’s reactions to Air Stylus for Galaxy Note, and to learn how they use the app. Let us know what you think! You can contact us via our support page or Twitter.